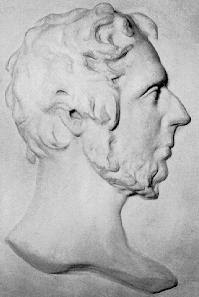 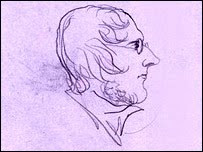 Branwell Brontë (1817-1848)
Patrick Branwell Brontë was the fourth of six children and
the only son of the Brontë family. He was born in Thornton and
moved with his family to Haworth in 1820. Of the four Brontë
siblings who survived into adulthood, Branwell seems to have been
regarded within the family as the most talented, at least during his
childhood and youth. While four of his five sisters were sent to
Cowan Bridge boarding school (resulting in the death of his two
oldest sisters, Maria and Elizabeth), Branwell was kept at home to be
privately educated by his father, who gave him a classical education
suitable for admission to Oxford or Cambridge. Branwell
collaborated as a writer with his sisters in childhood and adolescence, creating fictional
worlds. His surviving juvenilia shows that he collaborated most closely with Charlotte on
their imaginary world of Angria.
As a young man, Branwell was trained as a portrait painter in Haworth, and
worked as a portrait painter in Bradford in 1838 and
1839. His most famous portrait is of his three sisters, in
which he seems to have painted himself out. (pictured,
left) In 1840, Branwell became a tutor to a family of
young boys in Broughton-in-Furness but was dismissed
within six months. During this time he wrote a translation
of Horace. He was then employed on the Luddenden Foot
railway station in 1841 but was dismissed in 1842 due to
a deficit of eleven pounds in the accounts attributed to
incompetence rather than theft. During his period of
employment both as a tutor and on the railways he
harbored literary ambitions and published poetry under
various pseudonyms in the Yorkshire press.
In 1843 Branwell took up another tutoring
position in Thorp Green, appointed as the tutor to the
Robinson family's young son. He gained this position
through his sister Anne, who was the governess to the Robinsons' two older daughters.
During this time he corresponded with a number of old friends about his increasing
infatuation with Lydia Robinson. He was dismissed on unspecified charges in 1845. It is
thought, according to his account to his own family, the Robinson family's silence on the
reason for his dismissal, and subsequent gifts of money from Mrs. Robinson through her
servants, that he had an affair with Mrs. Robinson and that the affair had been discovered
by her husband.
Branwell returned home to his family at the Haworth parsonage. Devastated by
Mrs. Robinson's abandonment and the increasing unlikelihood of a reunion, he turned to
alcohol. He became an alcoholic and was thought to be addicted to laudanum. His
behavior became irrational and dangerous as he developed delirium tremens. Charlotte's
letters from this time demonstrate that she was angered by his behavior, but that her
father was patient with his broken son.
Although it was at this time that his sisters' first
novels were being accepted for publication, it is not known whether he was even
informed.
Branwell's severe addictions masked the onset of tuberculosis, and his family did
not realize that he was seriously ill until he collapsed outside the house and a local doctor
identified him as being in the disease's terminal stages. Not long after, in 1848, Branwell
dies, allegedly while standing up and leaning against a mantelpiece, purely in order to
prove that it could be done. His sister Emily died of the disease in December of that year,
while Anne followed the next May.
Posted by Blackriverrosi at 4:09 PM