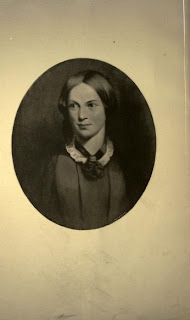 Charlotte Brontë (1816-1855)
Charlotte Brontë was born in Thornton, Yorkshire,
the third of the six Brontë children. In April 1820, Charlotte
moved with the family to Haworth. After her mother died in 1821,
Charlotte and the children were left in the care of their father and
aunt Elizabeth Branwell. In August 1824, Charlotte was sent with
three of her sisters; Emily, Maria, and Elizabeth, to the Clergy
Daughters' School at Cowan Bridge in Lancashire, which she
would later describe as Lowood School in Jane Eyre. Its poor
conditions, Charlotte maintained, permanently affected her health
and physical development and hastened the deaths of her two
elder sisters, Maria and Elizabeth, who both died of tuberculosis in
1825 soon after they were removed from the school.
At home in Haworth Parsonage, Charlotte and the other surviving children,
Branwell, Emily, and Anne, began creating imaginary kingdoms and chronicling the lives
and struggles of their inhabitants. Charlotte and Branwell wrote stories about the country
of Angria, while Emily and Anne wrote articles and poems about the country of Gondal.
The sagas were elaborate and convoluted (and still exist in part manuscripts) and
provided them with an obsessive interest in childhood and early adolescence, which
prepared them for their literary vocations in adulthood.
Charlotte continued her education at Roe Head school in Mirfield from 1831 to
1832, where she met her lifelong friends and correspondents, Ellen Nussey and Mary
Taylor. During this period she wrote the novella The Green Dwarf under the name of
Wellesley. Charlotte returned as a teacher in 1835. In 1839 she took up the first of many
positions as governess to various families in Yorkshire, a career she pursued until 1841.
In 1842 she and Emily traveled to Brussels to enroll in a pensionnat run by Constantin
Heger and his wife Claire Zoé Parent Heger. In return for board and tuition, Charlotte
taught English and Emily taught music. Their time at the pensionnat was cut short when
their aunt Elizabeth Branwell died of internal obstruction in October 1842. Charlotte
returned alone to Brussels in January 1843 to take up a teaching post at the pensionnat.
Her second stay at the pensionnat was not a happy one; she became lonely, homesick,
and deeply attached to Constantin Heger. She finally returned to Haworth in January
1844 and later used her time at the pensionnat as the inspiration for some of The
Professor and Villette.
In May 1846, Charlotte, Emily, and Anne published a joint collection of poetry
under the assumed names of Currer, Ellis, and Acton Bell. Although the book failed to
attract interest (only two copies were sold), the sisters decided to continue writing for
publication and began work on their first novels. Charlotte continued to use the name
'Currer Bell' when she published her first two novels. Of this, she later wrote:
Averse to personal publicity, we veiled our own names under those of Currer,
Ellis, and Acton Bell; the ambiguous choice being dictated by a sort of
conscientious scruple at assuming Christian names positively masculine, while we
did not like to declare ourselves women, because - without at that time suspecting
that our mode of writing and thinking was not what is called 'feminine' - we had a
13
vague impression that authoresses are liable to be looked on with prejudice; we
had noticed how critics sometimes use for their chastisement the weapon of
personality, and for their reward, a flattery, which is not true praise.
Her novels were deemed coarse by the critics. Much speculation took place as to who
Currer Bell really was, and whether Bell was a man or a woman.
Charlotte's brother, Branwell, the only son of the family, died in September 1848.
His death was attributed to tuberculosis, which also claimed sisters Emily and Anne in
December 1848 and May 1849, respectively.
Charlotte and her father were now left alone. In view of the enormous success of
Jane Eyre, she was persuaded by her publisher to visit London occasionally, where she
revealed her true identity and began to move in a more exalted social circle, becoming
friends with Harriet Martineau, Elizabeth Gaskell, William Makepeace Thackeray and G.
H. Lewes. However, she never left Haworth for more than a few weeks at a time as she
did not want to leave her aging father's side.
In June 1854, Charlotte married Arthur Bell Nicholls, her father's curate, and
became pregnant very soon thereafter. Her health declined rapidly during this time, and
according to Gaskell, her earliest biographer, she was attacked by "sensations of
perpetual nausea and ever-recurring faintness." Charlotte and her unborn child died
March 31, 1855. Her death certificate gives the cause of death as phthisis (tuberculosis),
but many biographers suggest she may have died from dehydration and malnourishment,
caused by excessive vomiting from severe morning sickness. There is also evidence to
suggest that Charlotte died from typhus she may have caught from Tabitha Ackroyd, the
Brontë household's oldest servant, who died shortly before her. Charlotte was interred in
the family vault in The Church of St. Michael and All Angels, Haworth, West Yorkshire,
England.
Posted by Blackriverrosi at 4:06 PM