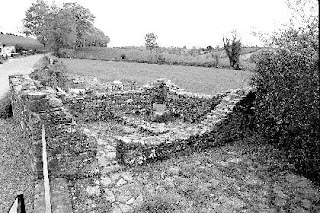 The Bronte family originated in beautiful county Down in Northern Ireland, the Bronte Homeland. Their father Patrick Brontë had been a preacher and a teacher at the tiny village of Drumballyroney.

Patrick Brontë was born Patrick Brunty in 1777. He later moved to England and changed his name to Brontë.

No one knows for sure why. Some suggest that he might have wanted to hide his humble origins while others point out that, being a man of letters, he might have chosen the name because of classical Greek influence, since in Greek mythology Brontes means “thunder” and was the name of one of the cyclops.

Patrick spelled his name with a dieresis over the “e” (Brontë) to stress that two syllables are pronounced (and highlight the second syllable as the one accented as in the Greek?).

Church and school house in Drumballyroney.

The school where Patrick taught still stands and has been restored and functions as a little museum. Next to it the old Church of Ireland church where his family attended and where he later preached. From the church grounds you have a beautiful view over the surrounding green rolling hills of Co Down, though on in winter it can be very cold and windy up there.

Patrick as a young man.

Posted by Blackriverrosi at 3:35 PM