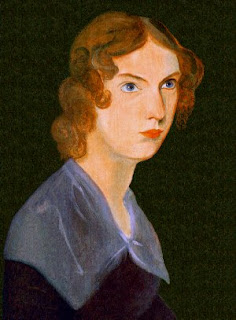 Anne Brontë (1820-1849)
Anne Brontë was born in Thornton, the last of the six
children. At the age of 1, Anne lost her mother Maria. During her
earliest childhood, she also lost her two eldest siblings, Maria and
Elizabeth, who both died of tuberculosis contracted at the Clergy
Daughters' boarding school at Cowan Bridge in 1825. Much has
been written about the influence of these deaths on Anne and her
remaining siblings as well as its possible influence on their writings.
Anne was educated at Miss Wooler's school at Roe Head,
Mirfield starting in 1835. Between 1839 and 1845 she worked as a
governess, first for the Ingham family, and later for the Robinson
family. While working for the Robinsons, Anne encouraged the
family to hire her brother Branwell to serve as a tutor. In 1845 both Portrait by Charlotte Brontë
Anne and Branwell left the Robinson household amidst rumors of an
affair between Branwell and Mrs. Robinson.
While working as a governess, Anne used her spare time to write, an activity she
pursued from her early childhood with Charlotte, Emily, and Branwell. In 1846, Anne,
Emily, and Charlotte’s work was published as Poems by Curer, Ellis, and Acton Bell. At
the same time, Anne began work on her first novel, Agnes Grey. The novel was published
in 1847 within a month of Charlotte's Jane Eyre and was originally bound in three
volumes with Emily's Wuthering Heights. Her second and last novel, The Tenant of
Wildfell Hall was published in 1848, shortly before the deaths of Branwell and Emily in
September and December of 1848 respectively.
Remembered as the most pious of the three Brontë sisters, Anne was a Christian
universalist, believing that all people will eventually be saved. She discussed that belief
in a December 1848 letter to the Rev. David Thom.
In May 1849, Anne died of pulmonary tuberculosis at the seaside resort of
Scarborough, England, where she had gone to convalesce after a prolonged illness. A
blue plaque on the wall of the town's Grand Hotel marks her place of death. She was
buried in the town's Saint Mary's Churchyard.
Posted by Blackriverrosi at 4:21 PM