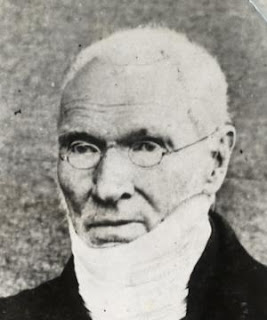 Patrick Brontë (1777-1861)
Reverend Patrick Brontë (born Drumballyroney, County
Down, Ireland, March 17, 1777, died Haworth, Yorkshire, June 7,
1861) was an Irish Anglican curate and writer who spent most of his
adult life in England and was the patriarch of the Brontë family. Born
Patrick Brunty, he changed the spelling of his name to Brontë. It is
not known for certain why he did this, although it is speculated that he
may have wished to hide his humble origins. The name Brontë may
have been chosen for the Greek god Bronte, God of Thunder. Other
theories argue that in 1799 King Ferdinand of Naples bestowed the
honour of Duke of Bronte in Sicily to Lord Nelson for fighting off the
French Navy. Patrick may have taken the name as a sign of respect for Lord Nelson.
Patrick was the first of ten children born to Hugh Brunty and Eleanor McCrory in
Drumballyroney (near Rathfriland), County Down. He had several apprenticeships (to a
blacksmith, a linen draper, and a weaver) until he became a teacher in 1798. In 1802 he
moved to Cambridge to study theology at St John's College. He gained his BA degree in
1806 and was appointed curate at Wethersfield, Essex, where he was ordained a deacon
of the Church of England, and ordained into the priesthood in 1807. In 1809 he became
assistant curate at Wellington in Shropshire and in 1810 he published his first poem,
“Winter Evening Thoughts”, in a local newspaper, followed in 1811 by Cottage Poems, a
collection of moral verse.
The following year (1812) he was appointed school examiner at a Wesleyan
academy, Woodhouse Grove School, near Guiseley, where he met Maria Branwell (1783-
1821). The couple were married on December 29, 1812. Their first child Maria (1814-
1825) was born after their move to Hartshead, Yorkshire, and their second, Elizabeth
(1815-1825), after the family moved to Thornton. There the rest of the family was born;
Charlotte (1816-1855), Patrick Branwell (1817-1848), Emily (1818-1848), and Anne
(1820-1849). Patrick was offered the Perpetual Curacy of Haworth in June 1819, and
took the family there in April 1820.
His sister-in-law Elizabeth Branwell joined the household in 1821 to help look
after the children and to care for the elder Maria, who was suffering the final stages of
terminal cancer. After Maria passed away later that year, Elizabeth moved permanently to
Haworth to act as Patrick's housekeeper. During this time, he was responsible for the
building of a Sunday School in Haworth, which opened in 1832. He remained active for
local causes into his old age and between 1849 and 1850 organised action to procure a
clean water supply for the village, which was eventually supplied in 1856.
Throughout these years, Patrick dealt with the losses of his six children. In 1825,
his two eldest daughters, Maria and Elizabeth, died within six weeks of each other from
tuberculosis. In 1848, both Branwell and Elizabeth also succumbed to tuberculosis,
closely followed by Anne in 1849. In 1855, Patrick’s last surviving child, Charlotte, died
just nine months after her marriage. Patrick worked with Elizabeth Gaskell on
Charlotte’s biography, and was responsible for the posthumous publication of her first
novel The Professor in 1857. Charlotte's husband Arthur Bell Nicholls (1819-1906), who
had been Patrick's curate, stayed with Patrick until 1861, when Patrick Brontë passed
away, having outlived his entire family.
Posted by Blackriverrosi at 3:56 PM