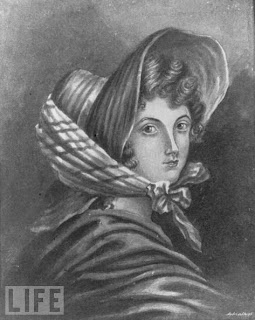 Emily Brontë (1818-1848)
Emily Brontë was born in Thornton, the fifth of six
children. In 1820, the family moved to Haworth, the town where
Emily would live for all but two years of her life. In 1824, three
years after the death of her mother, Emily left Haworth to attend
school with her three elder sisters. She attended school for less
then a year before being brought home following the illness, and
eventual death, of her sisters Maria and Elizabeth.
It was at home during the following years that the family’s
literary work began to flourish. The most commonly known work
from the family at this time were their tales of Angria (written
largely by Charlotte and Branwell) and Gondal (by Emily and
Anne). While some of the Angria tales still exist, little of Emily
and Anne’s work remains. Beyond these writings on Gondal, Portrait by Branwell Brontë
Emily also composed plays with Charlotte. Charlotte later wrote
of these: “Emily’s and my bed plays were established the 1st December 1827; the others
March 1828. Bed plays mean secret plays; they are very nice ones.” While these plays
are also lost, the do show a strong connection between Emily and Charlotte at this time.
In 1831 Charlotte left to attend Roe Head School. During this time, Emily’s bond with
Anne strengthened as they wrote more together, while her connection with Charlotte
faded.
In 1835 Charlotte took a job teaching at Roe Head School. Emily accompanied
her as a student, however she did not adjust well to the school. A solitary girl by nature,
Emily became very ill and homesick, and was sent home in mere months. After returning
home, Emily again immersed herself in writing. One of her earliest surviving poems
comes from this period:
High waving heather; ‘neath stormy blasts bending
Midnight and moonlight and bright shining stars;
Darkness and glory rejoicingly blending,
Earth rising to heaven and heaven descending,
Man’s spirit away from its drear dongeon sending,
Bursting the fetters and breaking the bars.
-December 13, 1836
In 1838, Emily commenced work as a teacher at Miss Patchett's Ladies Academy at Law
Hill School, near Halifax. Again, Emily suffered from homesickness, and returned to
Haworth six months later. In 1842, at Charlotte’s urging, Emily and Charlotte together
traveled to Brussels to attend the Pensionnat Heger. Emily’s time there was cut short by
the death of her aunt. Charlotte and Emily returned home for the funeral, and Emily
opted to remain at home from then on, feeling that was where she belonged.
In 1846, poems by the three sisters were collected and published as Poems by
Currer, Ellis, and Acton Bell. This collection was followed a year later by the publication
of Emily’s only novel, Wuthering Heights, in 1847. Originally, the book was published
under the Ellis Bell pseudonym, and as two volumes of a three volume set, the last
volume being Agnes Grey, by Acton Bell (Anne). Its innovative structure somewhat
puzzled critics, and although it received mixed reviews when it first came out, the book
subsequently became an English literary classic. Three years later, in 1850, Charlotte
edited and published Wuthering Heights as a stand-alone novel and under Emily's real
name.
Like her sisters, Emily's health had been weakened by the harsh local climate
(Haworth had one of the worst death rates in the country). In September 1848, Emily
caught a chill during the funeral of her brother Branwell, and her health quickly
deteriorated. She refused all medical help, insisting to her sisters that nature be allowed
to take its course. On December 19, 1848, Emily died of tuberculosis. She was interred
in the Church of St. Michael and All Angels family vault, Haworth, West Yorkshire.
Posted by Blackriverrosi at 4:16 PM